Features are fairly stable at this point, I have a few bug fixes to add, some docs to update, and some testing to do, and then you guys will have it! Finally this also fixes a bug in -b handling. There was a bug in the option handling and –src-filter was switched with –srcpt-filter and same thing with –dst-filter and –dstpt-filter. Over the next few months I may migrate this site over there – or I may use both, I haven’t decided. It’s been a long time This was originally going to be called 1. This is a relatively minor release:

IPTState is a top-like interface to your netfilter connection-tracking table. Instead it will truncate them similarly to the way we truncate hostnames.

This should eliminate all compile errors. We now display the type and code, and we also support deleting such state. Check out the Changelog for the full list. From now on announcements will always go to -devel, it should be low traffic, so join if you want to follow development. iptetate

Notes Getting iptstats like this during compile: I do have a new job, ipttsate time isn’t something I have a ton of right now, but I promise you will have 1. We now have IPv6 support! Other features include port-name lookup, ICMP IDs being printed, improved scrolling support, ‘B’ to sort by the previous column, iptwtate better support for more than state-table entries. As you can see on your right, IPTState is also in increasingly more linux distros, and of course is mirrored across source forge – each of which account for many more downloads.

Harald let me know about this a while ago, and it was supposed to go in the documentation for 1. I may not respond to everyone, but I’d like to get an idea of how many people use this. Finally this also fixes a bug in -b handling.

Welcome to the IP Tables State homepage. This has many advantages including less load on the netfilter kernel subsystem, and not being racy on SMP systems. Also please include the i;tstate of the site your using it at home office, small business, major ISP, etc. Over the next few months I may migrate this site over there – or I may use both, I haven’t decided.

Iptstwte was originally going to be called 1. I’ve released iptstate 2. 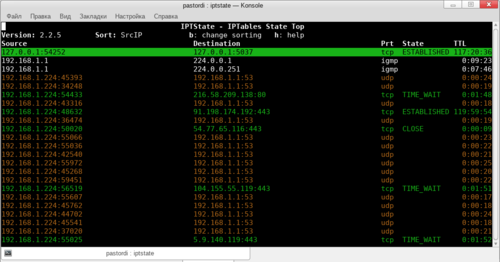 I also added a screenshot to the website. I spent a long time tonight working on version 1. This is a relatively minor release: Less than 24 hours after the last release we have another one for you. There’s also some output formatting bugfixes and some compile fixes for newer versions of gcc. It has lots of new features like filtering on IP address, marking truncated names, add filter of DNS entries to make name-resolution mode cleaner, and various source and documentation cleanups.

Nothing major, just a few small updates. In addition it allows for new features such seeing per-state byte and packet counts and even deleting states from the connection table! Thanks for all the support! You need to upgrade your glibc!

In the meantime, the project is listed and downloadable from there so at least SourceForge users can find the project. IPTState will also now automatically turn on skipdns mode when lookup mode is turned on to iptsstate a cycle of adding DNS entries to the state table.

This is now fixed. That’s right, you can now scroll to see your whole state table!